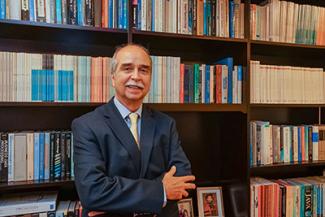 His career with Florida State University began in 1987 as adjunct faculty of the Florida State University campus in the Republic of Panama.  He was appointed Assistant Professor in 1989 and promoted to Associate Professor in 1994. From 1997 until 2000 Dr. Langoni served as Assistant Director for Academic Affairs. In 2000 he was appointed Vice-rector, position he held until August 2003 when he became Interim Rector of FSU – Panama. On June 14, 2004, he was appointed as Rector of the FSU campus in the Republic of Panama, with the responsibilities for leading the institution in the fulfillment of its mission of providing excellence in higher education in Latin America and the Caribbean. Since then FSU Panama has become a truly international campus with students from more than 30 different countries.

Dr. Langoni has served as consultant to the World Bank. His research interests are in the areas of Algorithm Analysis, Mathematical Modelling and Computational Complexity. He has presented papers on international conferences on Scheduling problems, algorithms and their complexity. He is a regular member of the Association for Computing Machinery. He has represented FSU-Republic of Panama on several committees, workshops, seminars and discussion groups on the topics of higher education and the development of an accreditation system in the country.