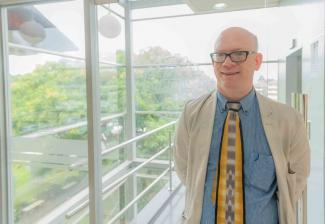 Benjamin Murphy was born in England and studied Philosophy and Theology at Pembroke College, Oxford, receiving his BA in 1993. He remained at Oxford as a postgraduate, studying Philosophical Theology under the supervision of Richard Swinburne. He received his doctorate in 2000. His thesis, entitled The Ontological Commitments of Theistic Language focused on the application of Michael Dummett’s work on realism and anti-realism to debates about religious language.

After completing his doctorate, he moved to Nicaragua in 2000 and then, in 2002, he moved to FSU – Rep of Panama Campus where he teaches classes in Philosophy and Religious Studies.

He continues to do research on the role of logic in religious discourse, and also on the scientific understanding of religion. He has presented papers to academic conferences in Europe, Russia, South Africa and South America on topics ranging from the nature of logic to the scientific interpretation of experiences of spiritual possession and has published a variety of peer-reviewed articles. At the graduate level, he has taught a class on Modern Roman Catholicism, as well as leading seminars on academic writing.