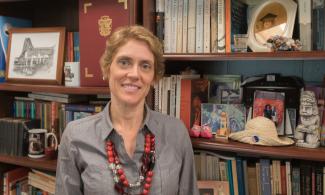 A native of Greece, Alexandra Anyfanti holds a BA in English Language and Literature from Aristotle University of Thessaloniki in Greece, an MA in English Literature from the University of Warwick, UK, and an EdD in Educational Leadership and Policy from Florida State University. She moved to Panama in 1993 and began her affiliation with FSU in January of 1994 as an adjunct instructor of English. She taught English and Composition as adjunct until 2001 when she was offered a full-time position in the area of English and Writing. Her involvement with campus life and activities on a voluntary basis prepared her to accept the position of Director of Student Affairs, a position that oversees the operation of the Student Affairs office, Academic Advising, Campus Life, and Student Rights and Responsibilities, a position she held for two years. After serving as interim Vice Rector for a year, she was offered and accepted the position of Vice Rector for Academic Affairs, a position she currently holds.

As Vice Rector for Academic Affairs she oversees the area of Academics, Course Planning and Scheduling as well as Academic Advising and Registration. Additionally, she liaises with major administrative offices in the main campus of FSU in Tallahassee such as Admissions and Records in order to handle admissions for the Republic of Panama campus. She still teaches English Composition, Introduction to Literature, and The Short Story.